Soybean yields in the United States have increased over time up to an average of 48 bu/acre in 2015. Yet, soybean yields up to 160 bu/acre have been reported in yield contests. In order to make sound management decisions that will continue to increase soybean yields, it is crucial to first understand the factors involved with grain yield determination in soybean.

Physiologically, soybean is considered to be source limited. This assumes that a soybean plant has an inherent ability to consistently make more yield (sink) than the environment allows. This is evident by the presence of flower abortion, which still occurs at 20 to 50% even with the highest yielding crops. Because of this, a soybean crop will adjust its yield potential to match the growing conditions. Thus, seed number (per acre) determination can be simply viewed as the crop setting as many seeds as it can support. If the crop produces more photosynthate (source), it will produce more yield (sink), and the amount of photosynthate produced is what determines yield potential.

More specifically, seed number determination is closely related to photosynthate production from R1 (first flower) to R5 (beginning seed) (Van Roekel et al., 2015). Whether a pod is set or the flower is aborted depends upon if there is sufficient photosynthate available to support the demand of the developing pod and seeds. Good growing conditions during this timeframe result in more photosynthate production and more pods will be set.

The photosynthate demand of a developing seed is related to that seed’s growth rate. Larger seeds usually have higher seed growth rates and higher photosynthetic demands to prevent seed abortion. However, given equal photosynthetic rates and reproductive partitioning, a large seeded variety can still produce the same amount of final grain weight as a smaller seeded variety; it will just have fewer seeds per acre. This can be visualized with Figure 1 if the big block of photosynthate is the same size but the small block of photosynthate needed per seed is bigger, you cannot divide the big block into as many small blocks to support seeds. Similarly, varieties with more seeds per pod (more 4-bean pods) will have higher photosynthate requirements per pod and often have fewer pods, but the final number of seeds per acre is usually the same.

Seed weight is a function of the seed growth rate and the length of the seed fill period (Figure 2; Van Roekel et al., 2015). As stated before, the seed growth rate is related to seed size. This is genetically controlled and generally stable throughout seed fill. Favorable late-season temperatures and rainfall can create larger seed weight by extending the seed fill duration, which does not impact seed number. Conversely, a severe late-season drought or disease like sudden death syndrome can terminate the seed fill period prematurely and reduce seed size.

Figure 2. Final seed weight is a function of the rate of seed growth and the duration of the seed fill period.

When both equations for seed number and seed weight are combined, seed growth rates can be removed to simplify the equation. Also, the proportion of photosynthate allocated to reproductive growth is largely out of our control and can be essentially ignored. As such, the major physiological processes for determining final grain yield in soybean are the amount of photosynthate produced from R1 to R5 and the length of the seed fill duration (Figure 3).

Figure 3. The main factors affecting final yield in soybean are the amount of photosynthate produced from R1 to R5 and the length of the seed fill duration.

While yield determination in soybean can be reduced down to this simple concept, the factors affecting crop growth and photosynthate production during these long reproductive periods are extremely complex. Maximizing yield depends upon alleviating all stresses throughout the entirety of reproductive development.

Prior to flowering, stresses do not have a large impact on final yield, provided that the stress did not severely stunt the plants. It is critical to close the rows and have >95% light interception by the beginning of flowering to maximize photosynthate production. This will often require a row spacing <30 inches.

Early planting and/or warm spring temperatures can induce earlier flowering and extend the flowering period. Soybeans initiate flowering based upon the interaction of daylength and heat unit accumulation (Lawn and James, 2011). Shorter daylengths hasten development. This can be observed with research from southern Pennsylvania in 2015 where shorter daylengths with both very early and very late planting reduced the growing degree units (GDUs) required to reach R1 (Table 1).

Parker et al. (2016) showed that soybean planted on April 15 would begin flowering on June 4, while May 11 planted soybean did not flower until June 30 after the summer solstice and when days begin to shorten (Figure 4). Longer daylengths extend reproductive development. This is evident by the longer R1 to R6 period with earlier planting (Table 1; Figure 4). Greater GDU and solar radiation accumulation from R1 to R6 have the potential to increase photosynthate production and thus, seed number and yield. 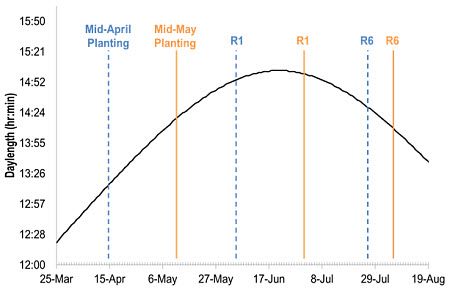 After planting, growing conditions throughout reproductive development will have the greatest influence on final yield. Both too much and not enough water can have a large impact on photosynthesis and crop growth. Fertility and pH must also allow for optimal crop growth rates. This should be managed according to soil and plant analyses in conjunction with the yield goal and calculated crop demands.

While weed control is important, herbicide applications during reproductive growth should be avoided due to the potential for reduced photosynthate production and seed number. This is especially true if the herbicide causes plant injury (Kyle, 2014). In-season management of insects and diseases are also crucial to limit their impact on crop growth and yield.

All of the aforementioned practices and any others should focus on achieving optimal growing conditions from R1 through R7 to maximize photosynthate production during seed set and to lengthen the seed fill period in order to maximize yield.

This physiological framework for grain yield determination in soybean provides a guide for understanding the effect of management practices and growing conditions on final yield. Stresses or gains in crop growth prior to R1 are not likely to have a large impact on final yield as long as full canopy closure occurs by flowering. Factors influencing photosynthate production during the period from R1 to R5 will have a significant impact on final seed number and yield. The following seed fill period from R6 to R7 will have a major impact on seed weight, which will also influence yield. This understanding of how yield is determined in soybean is the crucial first step in making management decisions for sustainable yield increases over time.

PIONEER® brand products are provided subject to the terms and conditions of purchase which are part of the labeling and purchase documents.

The foregoing is provided for informational use only. Please contact your Pioneer sales professional for information and suggestions specific to your operation. Product performance is variable and depends on many factors such as moisture and heat stress, soil type, management practices and environmental stress as well as disease and pest pressures. Individual results may vary.

TM ® Trademarks of Corteva Agriscience and its affiliated companies. © 2022 Corteva.